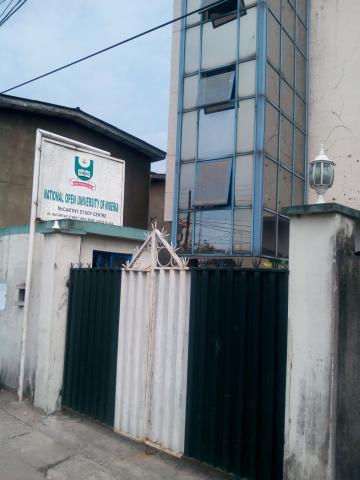 So for a few whiles now, McCarthy study centre has been trending over the failure of the students to get their exam slip stamped. We have had a progression of scenes where students squabble, trade words and even attempt to smack each other all on account of exam slip stamping.

So I myself (BBCNOUN founder) visited the school yesterday which is Friday, 19th 2019. I must confess it was a very serious one as students whose name was put down the later day had to commence before a new day list begin. Each list consists of 200+ names which are shared batch by batch, the later day batch wasn’t concluded which had batch A-I, meanwhile, batch A-E were concluded on Thursday the later day leaving F-I outstanding for the next day which was Friday 19th, 2019.

So I was in school exactly 9:00 am and I met batch M, meaning for that Friday we have more than 2000 students waiting to get stamped meanwhile we still have more than 920 students outstanding. I must say, this is just too pathetic. Last semester wasn’t like this! Lots of students are being humiliated and insulted on a daily basis.

check out:  I got here 4:am and still met 57 names - McCarthy study Centre student cries

To cut the long story short I got home 7 pm yesterday ..meaning I spent over 10hours without the managements concluding the outstanding figure, not to talk of progressing with the fresh day batches. Info got to us claimed only 4 staffs are attending to over 12,000 students (like the noun official site claims, but I’m sure the students are much more than that).

After getting home yesterday I got a report from a student of McCarthy (name withheld), he claimed he was humiliated and embarrassed by a cleaner in the school, in his words “IMAGINE A COMMON CLEANER TELLING A STUDENT GO!! WE CAN’T ATTEND TO YOU”. He also claimed the managements told the students that the batch H-I list had gone missing, and this provoked the students more who claimed to have come from a far distance, getting to school by 5 am, putting down their names, waiting till 6 pm only to be told they lost their slip.

Attached below is an Audio sent to us by the student: